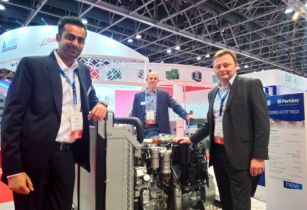 The Perkins' Engines team returns to Middle East Electricity (MEE) 2018 with a show-stopping line-up at the Dubai World Trade Centre on March 6-8. Perkins is determined to underline its strong position in the region?s booming power sector

According to Perkins, each engine is designed with an aim to deliver high power density with reduced operating costs and market-leading performance.

For original equipment manufacturers (OEMs), improved power density is a critical customer requirement,? said Karan Ohri, product marketing manager for electric power at Perkins. ?Each of our new engines delivers the same or better performance as engines that were historically much larger and heavier,? he added.

?The 1206 engine leverages the latest technology to draw maximum power from a smaller package. It?s part of a triple launch of new engines to deliver a significant uplift in power density to the booming Electric Power (EP) sector,? said Perkins.

The 1206 has 20 per cent improved power density and is 22 per cent lighter than the existing 8.8 litre 1506 platform and it produces 200-275 kVA. From a smaller package size, the same power is delivered with a positive and direct impact on the bottom line of EP customers.

The 9.3-litre 1706 is a part of a triple launch of new engines to deliver a significant uplift in power density to the booming Electric Power (EP) sector, delivering 22 per cent improved power density.

Some of the major features of the 1706 include enhanced air cleaner packaging, which makes the engine more compact. Improvements to the fan drive system, new fuel lines and a new-generation fuel system aim to provide the building blocks to deliver exceptional engine performance from a small engine size. The 1706 has the technologies required to meet the full range of global emission standards including EU Stage V and US EPA Tier 4 Final.

?The engine boosts Perkins? competitiveness in the EP sector by delivering a solution, for the first time, to customers looking to achieve 750 kVA in territories operating at 50 hz. It also provides a power density uplift for customers operating at 60 hz,? according to Perkins.

Perkins will also display its broader range of engines, designed to meet the comprehensive needs of major sectors in the EP market. This includes the ultra-compact Perkins ? 403A-11G and the 4008-30TAG. In addition, the company will also display its latest innovations such as Perkins? SmartCap and Perkins? My Engine App.

Installed by replacing the existing oil filler cap, the SmartCap solution allows end users to connect their mobile device to their engine via the free Perkins? My Engine App on their smartphone. The cap monitors Perkins' engine and sends data direct to the app, which can be downloaded from the Apple and Google App stores.

?This patented device is the world?s first low cost engine-specific connectivity device,? said Michael Wright, general manager, aftermarket at Perkins. ?It provides the way to add any connectivity to a mechanical engine and the only way to add telematics with no ongoing costs,? he added.

When combined, the Perkins SmartCap and Perkins My Engine App aim to give customers useful engine information which include: