Libya could produce 'more energy from solar power than oil' 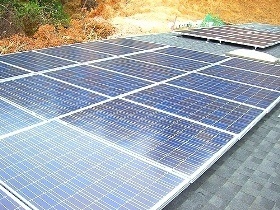 A study led by the university’s School of Architecture, Design and the Built Environment found that the oil-rich nation could generate enough renewable power to meet its own demand and a significant part of the world energy demand.

Amin Al-Habaibeh, leader of the research group at the university, remarked, "Although Libya is rich in renewable energy resources, it is in urgent need of a more comprehensive energy strategy. It is difficult to break the dependency on oil and natural gas, not just in terms of the country’s demand for it, but also in terms of the revenues that it generates.

"Libya needs a clear strategy and timetable is needed to take it forward. Work needs to be done to develop the skills and knowledge needed to install and maintain renewable energy systems,” he added.

Since Libya is exposed to the sun’s rays throughout the year with long hours during the day, it has an average daily solar radiation rate of about 7.6kW per hour per square metre per day.

Ahmed Mohamed, who worked on the project, added, "If Libya could harness only a tiny fraction of the renewable energy resources it has available in the form of solar and wind power, not only could it meet its own demands for energy, but also a significant part of the world’s demands by exporting electricity.

"The availability of renewable energy could provide a good complement to meet peak loads and current energy demand, and this in turn can be a good reason for encouraging wind and solar energy projects in Libya."

Dr Hafez Abdo, a lecturer in accounting at Nottingham Business School, said, “This study tackles a significant emerging issue that is related to the feasibility of implementing renewable energy options in an oil and gas rich country such as Libya.

“The significance of this study arises from the fact that the final results should be a stepping stone for other studies to find a sufficient solution to energy security and climate change in the world,” Abdo added.