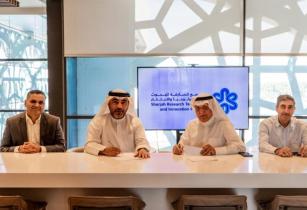 This came through a cooperation agreement signed by Hussain Al Mahmoudi, CEO of the SRTI Park, and Ahmed Mohamed Al Midfa, chairman of Al Midfa Investments Group. The construction works of the project will start at the beginning of the Q1 2022, and is planned to be delivered in the second quarter of next year 2023.

The ready-made warehouses project represents a new addition to the group of projects incubated by the SRTI Park, and it is also an opportunity for business owners who wish to benefit from innovative and advanced storage solutions with large areas and distinctive quality, which will attract major technical business companies that need special warehouses for work and storage, such as ‘fulfillment centres’ or what is known as ‘fulfillment houses.’

Al Mahmoudi stressed that the launch of the smart warehouse project came in accordance with the SRTIP's plan of activating the role of education and universities in scientific research, as well as enhancing their role in society and developing the national human cadre.

Al Midfa expressed his happiness with this partnership with the SRTI Park stressing the importance of the joint and parallel cooperation between the private and the public sectors to serve the economy of the emirate of Sharjah in supporting the innovative and knowledge industries represented by scientific research and universities.