Rolls-Royce has taken a significant step towards meeting its net zero goals, set out last year, with the approval of its mtu Series 4000 and Series 1600 diesel engines for use with sustainable fuels in power generation applications New capacity for generating electricity from solar, wind and other renewables has increased to a record level worldwide in 2021 and will grow further this year as governments increasingly seek to take advantage of renewables’ energy security and climate benefits, according to the International Energy Agency

The world added a record 295GW of new renewable power capacity in 2021, overcoming supply chain challenges, construction delays and high raw material prices, according to the IEA’s latest Renewable Energy Market Update. Global capacity additions are expected to rise this year to 320GW – equivalent to an amount that would come close to meeting the entire electricity demand of Germany or matching the European Union’s total electricity generation from natural gas. Solar PV is on course to account for 60% of global renewable power growth in 2022, followed by wind and hydropower.

In the European Union, annual additions jumped by almost 30% to 36GW in 2021, finally exceeding the bloc’s previous record of 35GW set a decade ago. The additional renewables capacity commissioned for 2022 and 2023 has the potential to significantly reduce the European Union’s dependence on Russian gas in the power sector.

Renewables’ growth so far this year is much faster than initially expected, driven by strong policy support in China, the European Union and Latin America, which are more than compensating for slower than anticipated growth in the United States. The US outlook is clouded by uncertainty over new incentives for wind and solar and by trade actions against solar PV imports from China and Southeast Asia.

In the absence of stronger policies, the amount of renewable power capacity added worldwide is expected to plateau in 2023, as continued progress for solar is offset by a 40% decline in hydropower expansion and little change in wind additions.

While energy markets face a wide range of uncertainties, the strengthened focus by governments on energy security and affordability – particularly in Europe – is building new momentum behind efforts to accelerate the deployment of energy efficiency solutions and renewable energy technologies.

The current growth in renewable power capacity would be even faster without the current supply chain and logistical challenges. The cost of installing solar PV and wind plants is expected to remain higher than pre-pandemic levels throughout 2022 and 2023 because of elevated commodity and freight prices, reversing a decade of declining costs.

Global additions of solar PV capacity are on course to break new records in both this year and next, with the annual market reaching 200 GW in 2023. Solar’s growth in China and India is accelerating, driven by strong policy support for large-scale projects, which can be completed at lower costs than fossil fuel alternatives. In the European Union, rooftop solar installations by households and companies are expected to help consumers save money as electricity bills rise.

Policy uncertainties, as well as long and complex permitting regulations, are preventing much faster growth for the wind industry. Having plunged 32% in 2021 after exceptionally high installations in 2020, additions of new onshore wind capacity are expected to recover slightly this year and next.

New additions of offshore wind capacity are set to drop 40% globally in 2022 after having been buoyed last year by a huge jump in China as developers rushed to meet a subsidy deadline. But global additions are still on course to be over 80% higher this year than in 2020. 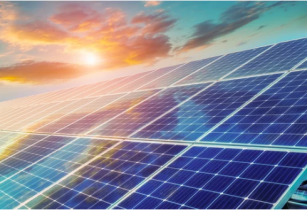 Emirates Water and Electricity Company (EWEC), one of the leading companies in the integrated coordination of planning, purchasing and supply of water and electricity across the UAE, has invited developers to submit an Expression of Interest (EOI) for the development of a new solar photovoltaic (PV) Independent Power Project to be located in the Ajban area of the Emirate of Abu Dhabi