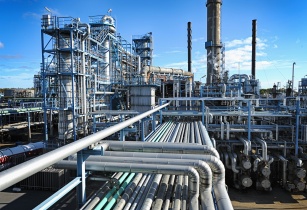 The companies are planning to develop a roadmap to cut emissions from GE’s natural gas turbines by “exploring hydrogen as a fuel, as well as carbon capture, utilisation and storage solutions.”

EGA operates 33 GE gas turbines at its Jebel Ali and Al-Taweelah facilities, which have a total power generation capacity of 5,200MW. Power generation accounts for a significant proportion of EGA’s greenhouse gas emissions, the company said in a statement about the partnership with GE.

EGA said that the MoU is inline with the UAE government’s hydrogen leadership roadmap, which was launched at the COP 26 event in Glasgow, UK, earlier in November. The roadmap will include the development of a strategy to support industries to transition to low-carbon operations to contribute towards the UAE’s Net Zero by 2050 target.

The 560,000 MWh of solar power will produce 40,000 tonnes of aluminium in the first year, with the potential for expansion in the future. EGA will supply solar-produced aluminium to customers under the new product name CelestiAL.